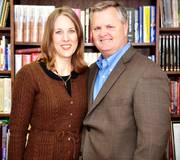 A seminary graduate with a Master's Degree in Theology from Mid-America Baptist Theological Seminary in Memphis and his wife of over 27 years, Kathy, came to Expressway Baptist Church in November of 2011.

Pastor Daniel moved to the Western Pennsylvania area from Memphis, TN in March of 2011 after accepting a government contracting position and was content being a pulpit supply preacher until he came to preach at Expressway the following May and June when God started working on his heart about returning to the pastorate.

"I moved up here and thought I could be of some help to some Southern Baptist Churches who may need somebody to fill in the pulpit. I wasn't looking nor did I want to be a pastor.” However, as is often the case, God had different plans.

"The pastor search committee asked for my resume so I gave them one on one sheet of paper with just the bare minimum information."

A couple months later the pastor search committee decided on Pastor Daniel but he was not convinced yet.

"God is so gracious. He knew the desires of my heart but I was still struggling until one day during a time of prayer I remembered listening to a sermon when a preacher said that you can impress at a distance but you can only impact at close range.” Right then I felt that God was asking me if I wanted to be impressive or impactful. It has always been the desire of my heart to be greatly used of God no matter where He placed me and it was then I knew God was calling me to Expressway. It was been more wonderful than I could ever imagine."

Pastor Daniel has been a pastor of four other Southern Baptist Churches and has been on mission trips to Australia, Mexico and Russia. A graduate from West Memphis High School in Arkansas and a Bachelor's of Communication degree from the University of Memphis. He attended Southwestern Baptist Theological Seminary in Ft. Worth, TX for two years before finishing at Mid-America.

Pastor Daniel and Kathy have two daughters, Kala who is 27 and Erin who is 24. Pastor Daniel loves to play sports, especially golf. He loves his Memphis Tigers and Arkansas Razorbacks teams and is a fan of the Pittsburgh Steelers. The St. Louis Cardinals is his favorite baseball team.

"God is doing such a wonderful work at Expressway and I believe it is because the people hear love His word. The 10:30 Sunday morning worship time in the center point of all we do.”

"It is at that time that we come as brothers and sisters in Christ and focus our attention on Christ through prayer, singing, giving and teaching the Word. We have such a wonderfully diverse congregation. Jesus says in John 12:32 "If I be lifted up, I will draw all me unto me." That's exactly what we try to do."